In which Mogwai are linked tenuously to Sarah Kane

1999's Come On Die Young was the exception that proved the rule that Mogwai are not an 'album band'. That record ordered itself on the principle of a sparseness towards which gravitated such critically-convenient - and frustratingly inspecific - adjectives as 'wintry' and 'autumnal'. In doing so, it achieved something like coherence; the Lanarkshire group's other LPs, by contrast, have tended towards a restlessness which invites suspicion that they lack an aesthetic to navigate by. Couple this to the fact that, particularly as a live act, they are capable of producing moments in which the listener wonders why they ever bother listening to anything else, and you have a band who are unusually difficult to write about. There's a temptation to be impressionistic, but the visuality of the music is, to misquote the vocal sample on 'Yes! I Am A Long Way From Home', wider than individual pictures. The songs often imply that there should be an accompanying image, but we never quite know what it's meant to be. Other attempts to pin down Mogwai's conundrum try to think it out in terms of what else the records sound like, which has led to unsatisfying comparisons to Slint, amongst others. More often, and particularly nowadays, it seems as if reviewers aren't really listening to their output at all: nearly every response to a new Mogwai release focuses on its proximity to, or distance from, the quiet/ loud 'formula' allegedly stamped on all of their early output.

The reality is that they've been a band in search of a formula ever since the early EPs, and that they've always struggled to synthesise their influences to a point at which their albums belie the presence of an underpinning idea. Come on Die Young , produced in the isolation of upstate New York by Dave Friedmann, just about managed this by dressing sepulchral instrumentation, played at the geological pace of Codeine or Low, with virtually inaudible samples and electronics. Its bursts of noise - the reverberating wash of 'Ex-Cowboy' and the Iommi-esque riffing in 'Christmas Steps' - responded organically to a context, and the one track to feature singing - the semi-eponymous 'Cody' - used vocals as a kind of how-to guide for the record's audience (the second verse begins 'When I drive alone at night'; one can't help but feel that the song is describing how and where it wants to be heard). Every other Mogwai album has slung together disparate approaches to make something that sounds a little like a primer for a catholically-compiled listen-before-you-die handbook to the forty years of music that preceded it. I owe my appreciation of everything from The Fall to Model 500, from Labradford to Art Ensemble of Chicago, to my having bought Young Team on a whim when I was seventeen, but Mogwai have never come close to seeming vital in the manner that all of those bands have. 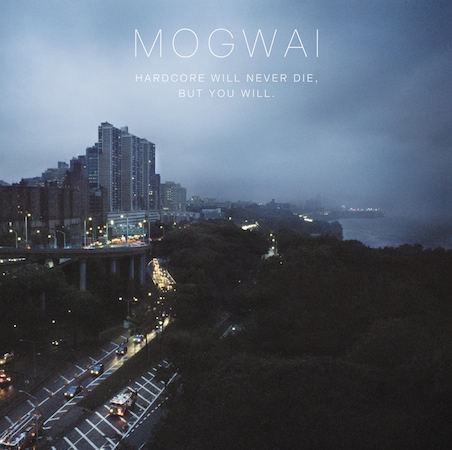 Hardcore Will Never Die, But You Will, their new record, doesn't mark a departure from this trend, but it seems, surprisingly, to have harnessed it as something like a virtue. The stylistic leaps that occur between tracks are no longer apologetic but flamboyant: 'Mexican Grand Prix', a decent enough exercise in motorik drumming and Farfisa, gives way to 'Rano Pano', which would only need a little more fuzz to resemble Earth. 'San Pedro', halfway through, shapes like a superior Screaming Trees in search of a Lanegan vocal, while the subsequent 'Letters to the Metro' returns to the Dirty Threeisms of Come on Die Young. It feels as if variousness has become the formal principle here, in contrast to earlier efforts on which the incongruity of the tracks was a by-product of an attempt to harmonise style. I don't think that this is reducible to well-worn clichés about postmodernist strategies of citation, though: it's more the case that Hardcore Will Never Die, But You Will operates as a retrospective investigation of the band's own inability to make an architecturally-sound object of their inspirations. While wary of the current tendency to use 'hauntology' as a justificatory descriptor of works which dip in and out of various pasts - I'm still to be convinced of the merits of the Ghost Box project - it strikes me that Mogwai have reached a point at which their music serves to interpret its own history. The album's obvious points of fracture speak of roads not travelled, of colours not pinned to masts.

If they have indeed reached such a level of self-awareness, Mogwai have produced an incisive comment on the decade which gave birth to them. In Britain, the 1990s, at their best, were all about attempts to marry eclecticism to a rejection of cheap irony: one aspect of millenial thinking was that the preceding hundred years of cultural production needed somehow to be collated and made available for assessment. I was reminded of this in November when I went to see a revival of Sarah Kane's Blasted at the Hammersmith Lyric. Famously, Blasted was hammered by critics on its debut, with many reviewers (not all of them working for the usual suspects) reducing the play to an assemblage of shock tactics in the épater la bourgeoisie tradition. Even more sensitive responses couldn't help but feel that it was something of a mess that resulted from a young writer grappling with the weight of her precedents. Sean Holmes's new take on the play has forced something of a reassessment, with various writers - and there seems to be no small measure of hypocrisy in this - looking to rectify their attacks on Kane.

I'd never seen Blasted before, so my own reaction might as well have been to a new play. As I expected, I was rattled by it, particularly after the jerk away from realism it makes once the imposing Aidan Kelly's unnamed soldier bursts into the Leeds hotel room where Ian, a rat-arsed, paranoid journalist, has just raped Cate, his epileptic teenage lover. After this point, the reference points come thick and fast: the soldier's sucking out of Ian's eyes asks us to remember Oedipus and King Lear, while the closing scene sees the protagonist neck-deep in a hole which burrows towards Beckett's Happy Days. One might also point out that the unexpected violation of a narrowly-delimited setting by a character who at least feels ontologically incongruous nods towards Pinter's early work, and that Ian's resentful ranting and multifaceted scheming makes us wonder what might have happened to Jimmy Porter had he grown up to work for the Yorkshire Post. As some find with Pinter, the uneasy mixing of classical unities, historically-aware naturalistic allusions (at one point, Ian and Cate argue about Leeds United's hooligan problems), and late modernist disjunctions makes the audience ask if too much is being attempted.

Ian's sub-philosophical diatribes, however, permit a reading of Blasted in which it becomes apparent that Kane was seeking to make a point about what happens when artworks are subjected to reductive, appropriating interpretations. Stuck in his pit, water tipping onto his face from some unseen source, the journalist announces the impossibility of salvation as if he's making the point that's always on the tip of the tongue of Beckett's characters. This proclamation of the non-existence of god seems, for him, to retrospectively justify his earlier behaviour: he's got his head round a (small) portion of Existentialism's argument, but failed to grasp its attendant ethical implications. Kane was perceptive in her understanding that the anti-theology worked out by Existentialism and Absurdism might, in the wrong hands, be perceived as a liberation from ethics, an invitation to perform actions which affirm nothing but the rejection of any principle of consideration. Given the geographical setting of Blasted, and the protagonist's name, it's hard not to see in this evacuation of responsibility a hint of Ian Brady; there's also a veiled critique of the surreptiously nihilistic doctrines of Thatcherism. Kane cites Beckett, but in a two-handed way which demands that his work either maintains or acquires a politics: the play's climax effectively reverses the movement typical of postmodernist quotation by reinstating political or ethical imperatives which seem to be on the verge of departure.

We're reaching a stage at which the aesthetics of the nineties are going to come under scrutiny in terms of how they responded to a historical climate which arguably didn't make a lot of sense at the time. Blasted dealt with the Balkan wars by suggesting that they were the decade's political unconscious: in this performance, Kelly's Northern Irish accent is used to imply that the only way that Sarajevo and Srebenica could be interpreted while they were happening was in the unsatisfactory vocabulary of a more proximate example of civil unrest. Kane's work might, then, be thought of as putting up a resistance to failures to think in either historical or political terms which were encouraged by the governments of the era and bolstered 'intellectually' by postmodernism's partialised accounts of Existentialism. Contemporary accounts of hauntology, which seek to repotentialise citational aesthetics for political critiques, might do well to go back to works which might, at the time, have felt like marginal agitprop.
Posted by Joe at 10:05 AM