The Death of the Author...

...as in the Gilbert Adair novel, rather than the Barthes essay, although the ramifications of Adair's title are exactly what you'd expect. 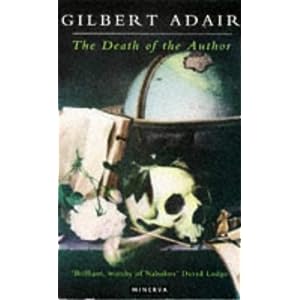 I picked this up with a couple of other second-hand books on January 2nd, when I was still pretending that everything was free and easy and that I wasn't worried about work. The motive behind buying something by Adair was that, with the author having recently passed away, I thought it fair to give him another go after having been so critical of The Holy Innocents, which I read a few years ago.

The Death of the Author tells the story of Leo Sfax, an emigré professor of literature (with specific interests in Romanticism and literary theory) at a fictitious New England university. Having survived the Occupation in France, he has developed a considerable critical reputation in the United States, initially with an ingenious essay on Mallarmé but more recently with The Theory, an idea which dictates - you're probably way ahead of my conceit now - that authors are not stable entities that can be relied upon as sources of literary significance, but textual constructs who represent only one more deferral of meaning. As the narrative progresses, Sfax's recollections become increasingly candid, albeit without shedding a self-justifying defensiveness familiar to anyone who has read Lolita, and we discover that his wartime activity was based upon the production of articles for a collaborationist newspaper. While none of these pieces were even vaguely intellectually admirable, several were outrightly anti-semitic. When one of Sfax's admiring former graduate students preparing a biography on the esteemed critic, murders begin to shake the previously peaceful academic community.

It would be impossible for this snarky novella to be any more transparent about who and what is being 'satirised'. Obviously, the affair is given a touch of morbidly comic hyperbole once the killings start, but what precedes the swerve into melodrama follows the contours of the de Man affair pretty faithfully. Now, I'm no longer as strict an adherent to The Theory - The Theory in the novel being fairly identical with a generalised version of the one proposed by de Man in Allegories of Reading, albeit with a twist of Barthes for the purposes of simplification - as I once was, but The Death of the Author made me feel somewhat uncomfortable. Its Amisian irony failed, to me, to conceal an enraged conviction that, due to the poor judgement of de Man (and, in the context, only de Man) during the Occupation, it is impossible to separate poststructuralist claims about undecidability from fascism. I'm sure that there are those who read the novel differently, perhaps as a more subtle critique of the potential implications of The Theory on our sense of political responsibility, but, if they existed, these nuances were lost on me.

This depended on two things. First, the humour lacked gradation. The structure of the joke demanded a knowing recognition of the 'fact' that there were/ are only ever two kinds of theorist, namely the high-handed sophisticates like Sfax/ de Man and Anglophone camp followers converted in the wake of a collective cultural cringe: J. Hillis Miller, Frank Lentricchia, and Frank Kermode are all, I think, implicated in the depictions of the latter. These two caricatures - the nihilistic theoretical libertine and the elbow-patched bandwagon jumper - continue to act as bogeymen in journalistic discussions of theory, which have frequently pandered to (and propagated) chattering class anxieties about its (lack of) 'intelligibility'. Adair's writing plays to the gallery; given the depth of the author's understanding of French literature and culture (he translated Perec's La Disparition) this is rather sad, and for him to have played the satire this way indicates a genuine belief that the radical critique of literary meaning owed a debt to some form of totalitarian sentiment.

The other thing which caused me to doubt that Adair was willing to give theory the benefit of the doubt on any level was the novel's comprehensive failure to discuss the ethical concerns which dogged poststructuralism from the off. There's a Derrida figure lurking in its pages, but it's a version based entirely on several passages from 'Structure, Sign and Play in the Discourse of the Human Sciences' rather than on the Levinas-influenced philosopher of friendship, responsibility, and hospitality that emerged long before this text was written. In other words, the whole 'project' of theory is reduced to just that: radical thought is elided with right-wing political violence.

That's where the question arises. Did Adair alight on this interpretation via a consideration of de Man's biography or through an unpleasant encounter with the difficulty of his writing? Much of the hostility to theory begins with an insecurity about its impenetrability and then latches onto political, or pseudo-political, justifications. The critiques made by, say, Frederic Jameson of the essentialising relativism that poststructuralism appeared to justify are inspired efforts to resist the reification and commodification of continental theory, but one can't help but feel that the people who laughed hardest and most connivingly with this novel would regard Jameson, or Zizek, or Badiou as latter-day 'totalitarians' of complexity. Even though I share some of Adair's manifest reservations about the openness of The Theory to some shabby uses - after all, it has permitted a certain amount of 'it means what you want it to mean'-type answers in academic essays, the motor of The Death of the Author seemed to be, at root, a semi-populist, moderately anti-intellectual one.
Posted by Joe at 4:49 PM